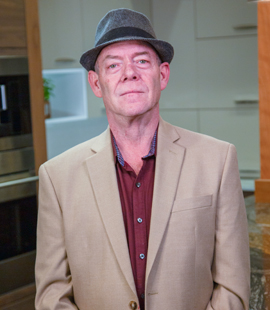 Paul describes himself as the “old timer” with JM Kitchen and Bath Design, as he’s been with the company for 40 years, “practicing” kitchen and bath design and sales for 32 of those years. His brother Jeff and father Milton founded the company (which is where the name JM Kitchen and Bath comes from) in 1974 and Paul and his brother Neil took it over in 1988 – running it until 2005 when Lewis Snyder purchased it from them. Paul stayed on ever since to continue his passion for kitchen and bath design.

Paul recalls getting his start in the business in fourth grade, laying baseboard for $.55 per linear foot, sweeping floors, sanding, and trimming beams. As he grew older and gained more experience, Paul took on more responsibilities, ultimately drawing and bidding while gaining skill in design. Looking back at his four decades in the business, Paul is especially fond of how he and Neil became owners and were able to reinvent the company to keep it viable as the market evolved. He takes pride in the growth the company experienced during his ownership but ultimately was happy to sell it so that he could focus on the aspect he loves most – design.

Paul’s background in the construction side of the business and knowing how it intersects with design is what he considers his greatest asset to his customers. The design aspect comes naturally to him, as he remembers his father standing in their house and “staring at things for hours” designing spaces in his mind, which Paul admits he now does himself. He says his job is to use his knack for design and customize it to what individual customers want. Paul enjoys having a wide selection of top products at his fingertips, and he, like all JM designers, has a breadth of knowledge of those products to be able to hold people’s hands through all of their nervous selections in a project.

Paul believes “Integrity is the seed for achievement – it’s the principle that never fails lives.” He works and lives by the motto: “Integrity is what happens when nobody is looking.” He applies that to his work every day, and especially in his initial consultation with customers. “I hope to convey integrity in that meeting and wanting to do the right thing and having their interest at heart,” he says. “It’s not all about the sale and every dollar.”

Paul has lived in Douglas County since 1972. He says he was very fortunate to have been brought up here, as he loves all the things about Colorado – the weather, nightlife, and being outdoors. When he’s not working, he’s often singing. Paul has sung at more than 400 funerals in the last 20 years and enjoys singing in choirs. He sings at his church and has sung in Opera Colorado. Paul also enjoys working on home improvement projects and gardening his many flowers around his home. The baby of 11 siblings, Paul appreciates being surrounded by family still today. He’s been married to his wife Laura for 30 years and they have two grown boys, Austin and Kyle.