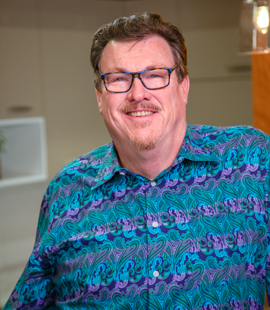 Neal Simpkiss has been designing remodeling projects since the late 1980s (kitchens specifically starting in the early 2000s) and joined JM Kitchen and Bath in 2014. But despite his successful interior design career that has spanned more than three decades, Neal didn’t start out in this business. He has degrees in microbiology and biochemistry and worked as a chemical engineer out of college, before soon realizing it was not his calling. That career path “didn’t address any of my creative urges,” Neal says.

Conversely, Neal knew he had a knack for design and applied his skills at a job designing commercial office space – before ultimately moving into the more creative kitchen remodeling/design. Finding his calling in interior design allowed him to mesh his creative side with his cerebral working side. He found success in the design industry that he says is “good for my soul”.

When beginning a project, Neal immerses himself in conversations with the client to understand their likes and dislikes of the current space. He’ll then gain inspiration from the customer’s home, pieces of their favorite artwork, and what they’ve done furniture-wise in other parts of their home to understand their personal tastes. He’ll then tie in that existing sense of style into their new space, while always trying to design something unique for each of his clients. Neal adds value through his vast product knowledge and understanding what products and variables he can use to make a space unique and special

Neal loves to bring what he calls a “solid B-level” grade of comedy to his work and tries to have fun with every project. But he takes his work seriously and excels in attention to detail so that for most potential issues that may arise in a project, he “can catch 99%” of them before they become issues and mitigate them.
He works by the motto, “No battle plan ever escapes first contact with the enemy,” meaning once the demolition starts, something is going to change, and he will be prepared for all possibilities.

“When something does come up, we can work together to find options and work through the project as smoothly and, quite honestly, as joyfully as possible. I like to have fun, I enjoy my work, and I like to bring that enjoyment to people because certainly, a kitchen remodel will have its share of blood, sweat, and tears.”

Neal grew up in Indiana and moved to Colorado in the mid-1980s and has raised his children here. He and his fiancé have six grown children among them and 10 grandkids.

He says he isn’t the skier that he used to be but has promised to teach his young grandkids how to ski. One of his greatest hobbies, however, is to hop on his Harley or his old “project bike”, a monster six-cylinder Honda Valkyrie, and go touring in the mountains to get away from the city.

But his true passion of interior design is always at the forefront, and Neal and his fiancé are constantly working on projects, including remodeling a condo in Perry Park, which they plan to move into someday.